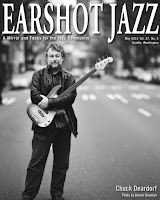 EARSHOT JAZZ
A Mirror and Focus for the Jazz Community
May 2011, Vol. 27, No. 05
Seattle, Washington

Chuck Deardorf perches on a stool at the back of the stage, the best view of the audience. This vantage point is ideal for a bass player’s role as harmonic backbone and center of gravity for the groove. Deardorf scans the crowd and pilots the band through familiar waters like a seasoned Northwest ferry captain.

The club’s wooden stage amplifies low notes, making inexperienced bassists produce unfocused booms. But Deardorf’s tone is even and clear over the entire neck of his German acoustic bass, built in the late 1800’s. His fingers crawl over the strings like a spider. Quick solo phrases end on a brief sustained note with a touch of vibrato. His sound is refined, precise, fluid – reminiscent of ECM recordings from the late 1970’s.

Deardorf wears a black mock turtleneck, dark slacks, and comfortable loafers. Although this is “gig attire,” he doesn’t wear flashy clothes off the stand. His eyes sparkle with wisdom behind frameless glasses. Making eye contact, he speaks quietly, directly, with a generous dose of self-deprecating wit. His wavy dark hair sweeps back and does not cover his ears. His neatly trimmed beard turns gray at the front of his chin and the back of his jaw line.

Deardorf was first exposed to music when his mother played stride piano at their Ohio home. Three of the five siblings played music but Deardorf jokes that he was “The only one dumb enough to make it a profession.”

“I came up playing trombone through music programs in Ohio public schools – state contests, marching band, concert band. My parents encouraged me to be a musician, but had reservations about me doing it for a living. They had heard horror stories about the life of musicians – they are all true – but they supported me financially through my undergraduate study at Evergreen State College. I was lucky. I know many musicians who are still in conflict with their parents over playing music.”

After earning his degree, Deardorf put his trombone in the closet to answer the call of the bass. “On trombone, the slide positions have to be in your head,” says Deardorf punching the air in a pantomime of playing. “But on bass you can look at notes on the fingerboard.” Deardorf holds his left hand near his cheek, turning his head to stare at his index finger, pantomiming his words.

“I started teaching private lessons in music stores. Scott Reeves hired me as an adjunct bass teacher at Western Washington University in Bellingham. My first student was the talented Portland bassist Dave Captein and I was like, ‘What am I going to teach THIS guy?’ Well, good private lessons are a two-way street.”

“Jim Knapp started the Jazz program at Cornish in 1974. Gary Peacock was teaching acoustic bass and Jim asked me to teach electric bass in 1979. Gary had stopped playing for five years and was in Seattle studying Chinese medicine or something. I got to hear Gary get his chops back. That was cool.”

In 1986, Jane Peck, the Music Department Chair, hired Deardorf to be the Jazz Program Administrator. He held that position for almost fifteen years, and in 2000 when the college administration merged the Classical and Jazz Programs into a single position, he assumed even more responsibility. “Over the past 25 years I figure I’ve auditioned about 1,500 applicants and advised 1,000 students.”

Last September, Deardorf stepped down from administration and became a full time-teacher. Deardorf teaches bass, leads classes in sight-reading, coaches ensembles, and counsels students in music careers.“His mentorship and influence on all students is powerful,” says fellow faculty member Jovino Santos Neto. But Deardorf worries about the future of his students. “Where will they play after they graduate, once they get out there and start fighting? My generation, geezers now, could work six nights a week to pay rent. That’s difficult when there are five bands sharing one night.”

“That doesn’t mean we don’t teach jazz music. It’s the information and art that needs to be passed on. Unless you are willing to go 100% in music, perhaps you should do something else for a living. One student’s parents asked ‘What’s your placement rate after graduation?’ I guarantee that 100% of our students have played a gig. I didn’t say that, but I thought it. I’m happy to see recent graduates creating their own scene.”

“Cornish attracts students that are slightly off the beaten path. The faculty has freedom to bring their own approach because each teacher is different.” It is exceptional for an educational institution to recognize the spirit of mutating freshness that is crucial to jazz. Deardorf explains, “You can’t codify jazz. If you do, it dies.”

The bias at Cornish is toward performance over scholarly research so all teachers play with student, faculty, professional, and community ensembles. For 30 years Chuck has been the first call bassist at Seattle clubs whenever traveling veteran jazz musicians need a local rhythm section. Deardorf performs regularly in bands led by pianist Neto and vibraphonist Susan Pascal. This March, while on sabbatical from Cornish College of the Arts, Deardorf released a new recording – Transparence. Deardorf has accompanied notable artists on more than 30 recordings as a sideman, but Transparence is first CD as a band leader. This new project sums up Deardorf’s musical influences, partnerships, and artistry from decades of teaching and playing jazz.

“I couldn’t jump right into John Coltrane and Charlie Parker when I was younger because my ears weren’t acclimated. I just didn’t get it,” says Deardorf. “I came to jazz through Rhythm and Blues, rock jams of Miles Davis with John McLaughlin, and fusion by Weather Report. My early listening was Pat Metheny’s Bright Size Life and Keith Jarrett’s European band with saxophonist Jan Garbarek.

“One of the first jazz recordings I heard in college – the first tune you learn as a bass player – was ‘So What’ on Miles Davis’ Four and More ’64. In the aggressive playing I recognized that rock and roll attitude of not worrying about mistakes, where the rhythm section energy is crackling with precision, and breathing,” he reminisces.

“After I saw Eberhard Weber play electric upright bass with Gary Burton, I bought a Fender electric bass and put on a new fretless finger board. Then I heard Jaco Pastorius’ first record–that was a revelation. He was doing that thing that I was going for. I don’t like to rank players in categories, but Jaco was the Charlie Parker of fretless electric bass. On the song ‘Used to be a Cha Cha’ he was a total groove-meister with those 16th-note bass lines. I couldn’t do that as a sideman, because it was too busy and would clash with the soloist. But I can do it as a leader.”

On Transparence, a nod to Pastorius comes on the Beatles’ “Dear Prudence.” Starting with a harmonic chime that sounds like the old pendulum clock in Deardorf’s living room, the bass states the melody over a descending acoustic guitar figure. Deardorf’s opening notes swell in volume. When the drums kick in for the groove, he opens fire with Pastorius-like machine gun bass notes. After an overdubbed bass solo, the meter switches from 4/4 to 7/4 for the drum solo and closing melody. The time is so solid the groove does not budge.

“I like guys who can do a lot of different things – players who have a broad approach with no walls between genres or styles.” Deardorf demonstrates this on Transparence by mixing up swinging standards, driving rock, Latin fusion, free bop, and delicate ballads. Even though each track includes melodic statements and solos by the bass, the sound keeps changing throughout the recording because no two tracks have the same instrumentation or personnel.

Each of the tracks has a surprise twist. For example, the opening tune “Collage” drops the listener into the middle of everyone simultaneously improvising over the chord changes to “You’d Be So Nice to Come Home To.” The melody, with quotes from several bebop tunes, only comes after the solos and is played in unison, drums and bass included. After the melody, sax and piano trade fours and the key modulates on the last section of the song form.

On “Alone Together” Deardorf lays down a steady repeated figure that allows guitarist Bruce Forman to stretch time and erase bar lines and avoid playing on the first beat of a measure. The high level of listening and interplay dove-tails the end of Deardorf’s solo with the start of Forman’s as they spontaneously play syncopated descending lines together.

Antonio Carlos Jobim’s “Zingaro” features an urgent but gracefully arching solo by guitarist Rick Peckham. The balanced melodic and rhythmic counterpoint between solo and bass builds to a two-note peak by the guitar with just enough distortion to let out a soulful cry.

Pianist Bill Mays and Forman play duets with Deardorf on “Moon and Sand” and “Sweet Lorraine” respectively. The groove is so strong and the communication so intimate on both of these cuts that drums are not missed.

“Creatinine” recalls the freedom of McCoy Tyner’s “Passion Dance.” Added to the sounds of the band are overdubs and signal processing. The group progressively drops the constraints of 4-bar phrases, written harmony, and finally pulse.

Deardorf’s musical collaborators have nothing but praise for his talent. Neto says, “Chuck’s ability to lock in with a rhythm section in any style of music is uncanny; his ears go deep inside the groove, as he always finds the most musical way to negotiate awkward chord changes, odd time signatures and melodic jumps.” Transparence features this aspect of Deardorf’s playing on Neto’s “De Mansinho.”
Forman says, “He brings something special to every situation and he brings out the best in everyone who plays with him. Chuck is a rare talent, extremely versatile, yet still able to retain his artistic signature throughout.”

Chuck’s style of playing makes complex technique and improvisation sound effortless. On days he is not playing a gig, he practices to stay in physical shape. “I have a maintenance routine of scales and arpeggios that takes 45 to 60 minutes. I transcribe saxophone solos to understand what they were thinking – the structure, concept, and rhythms. I work on the bow with the Bach Cello Suites. I look over music for upcoming gigs.”

While on sabbatical, Chuck plans to put energy behind the release of Transparence, compile materials from his teaching into an instructional book for bass players, and spend more time with his family.
Deardorf met his wife, vocalist Kelly Harland, in 1983 when they worked a lounge gig together. They married in 1989 and share a cozy home on a quiet street in Northeast Seattle. Their son Will was born in 1991. Harland documented Deardorf’s love and devotion to his son in her memoir A Will of His Own: Reflections on Parenting a Child with Autism.

Five years ago, Deardorf was diagnosed with acute nephritis – “The inside of my kidneys are slowly fossilizing.” Inherited from his father and grandfather, the main symptom is fatigue. He regulates his diet and blood pressure. Now that the disease has progressed to stage 4, he would need to begin dialysis in a month or two. Bassist and long-time friend Bruce Phares set up a Facebook page Let’s Find a Kidney for Chuckie D! to aid in the search for a kidney donor. Luckily, one of Chuck’s brothers was a match so they went under the knife in late April.

It will take more than a kidney transplant to knock Chuck out of his groove. In March, he headlined the Earshot Jazz Golden Ear Awards and was honored by being inducted into the Jazz Hall of Fame. This summer he plans to teach jazz camps at Cornish and Centrum’s Jazz Port Townsend in July before returning to his full schedule in the fall.