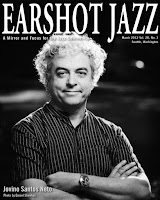 Vocalist Flora McGill asks, “Can we do it all the way through with the solo to feel how long that is?” “Of course!” says Jovino. His hands pounce back onto the keyboard.

“I can do like this, that I used to do with a band.” This time through, Jovino introduces the song with tinkling bells in the upper register of the piano. Flora’s clear lyrics add a floating waltz over the piano’s steady gait. She sweetens the end of her notes with vibrato. The voice and piano play two different rhythms that mesh, weaving a fabric of sound.


Jovino Santos Neto, professor of Piano and Jazz Composition at Cornish College of the Arts, is no stranger to rehearsal. Earlier in his career he spent fifteen years rehearsing intensely. Six hours a day, five days a week, he practiced music with a band led by world renowned composer Hermeto Pascoal, a long haired albino Brazilian known as the “champ,” “shaman,” or “witch.” Hermeto hears music in everything – animals, trees, speech, even scrap metal. While Jovino played in Hermeto’s band there were thousands of songs to learn. The musicians chose to live close to Hermeto’s house so more time could be spent rehearsing and less time would be wasted commuting.

“Jovino is an excellent musician, creatively and technically speaking,” says Hermeto. “He was a biologist but he chose music. He used to speak only about trees and I told him to choose. He never answered me about that but never stopped playing.”

****
Jovino Santos Neto was born September 18, 1954 in Rio de Janeiro. He played on a piano in the living room that his father bought for his three sisters. As he grew and began to perform in public, he realized “the hang was not very good. You know… all the alcohol and smoke. But I loved the people I played with.”

Straying from music, he pursued a scientific path, studying biology in Rio and Montreal. But Jovino’s plans blurred when he heard Hermeto’s recording Free Music in 1973. “I said, ‘What is this?’ I couldn’t define what category his music fit,” says Jovino. “It was very interesting, puzzling, and provoking.”

At a concert in the Museum of Modern Art in Rio, Jovino listened to Hermeto’s music again. He heard songs morph, a journey from beginning to end. Jovino had been under the spell of tight ensembles playing rapid passages as a single instrument – John McLaughlin’s Mahavishnu Orchestra and Chick Corea’s Return to Forever. But in Hermeto’s music, Jovino heard an ensemble where all the parts connected without being in unison.

Soon after, Jovino learned that Hermeto was living nearby in Rio. A mutual friend pointed out the house. On a Sunday afternoon, Jovino knocked on the door. Hermeto’s wife led him to the living room. Hermeto, wearing headphones, sat playing an electric piano. He was deeply concentrating and did not notice his visitor. For twenty minutes, Jovino listened to the keys click with no pitch.

Hermeto handed Jovino a piece of written music. “Can you read?” “Yes,” Jovino lied. “Ok,” said Hermeto, “I have a gig on Friday. I want to play winds so you play piano.”

What began as an unexpected musical invitation evolved into a long lasting partnership. From 1977 to 1992, Jovino studied, performed, and even managed the touring ensemble with Hermeto. The extensive hours making music together blurred the lines between rehearsal and performance, composition and improvisation, technique and intuition.

Through Hermeto’s music, Jovino got in touch with what he calls, “the reflex nature of music intuition.” When questioned about technical approaches to his music, Hermeto said, “I can not show you technique without showing you the music.” The path was to play music that was challenging but “without a goal of accomplishment. Like playing with a ball, but not keeping score.”

Touring with Hermeto took Jovino around the world. The band even performed in Seattle at the Back Stage in Ballard during 1990 and 1991. On a ferry between Vancouver and Victoria, Jovino was enchanted by a surfacing pod of orcas. He fell in love with the Pacific Northwest.

As 1992 drew to a close, Jovino yearned to study conducting, focus on composing, and hand over the business aspects of managing Hermeto’s band. They parted on good terms. Jovino moved to Seattle with his wife Luzia and their two children.

Jovino was accepted as a conducting student at Cornish. A visiting percussionist from the bay area, Michael Spiro, was astonished to find out Jovino was a student. He let his friends at Cornish know that Jovino had the skills and experience to be teaching at the college level. Soon, a teaching position opened up. Jovino applied and joined the faculty.

Jovino quickly infected the band with his buoyant spirit. “Jovino is a constant whirlwind of ideas and positivity,” says Busch. “He's like a wild bronco that dances samba on the piano.”

Jovino’s ebullience is not easily corralled. “He's a risk taker,” continues Busch. “He'll show us a song once in rehearsal and then call it on the bandstand, even when we don't really know it. And it's in 11/8! Even if things don't go quite right, he has the ability to laugh and understand that it's part of the process.”

The process often involves an intuitive and spontaneous search for music in unexpected places. “One time in the studio,” says Busch, “Jovino looked around the room and had me put some rocks in a tin cup and rattle them. We didn't even listen on the headphones to the music. He just wanted to explore some sounds… sounds and ideas that were popping into his head at that exact moment.”

In fact, the fundamental lesson Jovino learned from Hermeto was that everything is sound, and all sound is music. Sharing this lesson and the prolific output of music it inspired are important missions for Jovino. He hopes to publish many of the thousands of scores and notebooks Hermeto “archived” under a bed. Jovino lost his first piano and many documents in his nearby home due to termites. Determined to preserve Hermeto’s trove of music, he copied every sheet of music he could find. Jovino organized scores for 32 of Hermeto’s songs in a Portuguese titled book Tudo E Som, which in English means Everything is Sound.

But if everything is sound, not all of it can be captured on paper. Busch says, “I've seen footage of him [Jovino] playing music with his hands and arms on the surface of a river with Hermeto's band, playing with factory workers and the rhythmic grooves of their machinery, making sounds and music with farm animals, crickets and frogs, using the patterns from language as a source for melody and composition. Hermeto's latest project I understand is to play music with his own heartbeat, amplified with a stethoscope Jovino helped him rig up! It's a never-ending exploration. For them, everything is music. I feel really fortunate to be exposed to Jovino's musical world! It's an amazing education.”

And Jovino embraces his role as teacher. Beyond his school duties at Cornish, he teaches at music camps in California and Brazil. “Jovino thrives on meeting a group of students and working with them spontaneously, in the moment,” says Busch. “He usually doesn't bring charts, but rather looks around the room to see who's playing what. Then he just starts composing on the spot. He invents grooves, melody and counterpoint – like a chef masterfully creating with just the ingredients before him.”

That welcoming attitude is refreshing. “I am most impressed with his openness to all musical ideas,” says Wainapel. “Jovino is truly a proponent of ‘Universal Music,’ just like his mentor Hermeto. There's no narrow-mindedness here, which is so common in the world of musicians! I've learned so much from Jovino and am eternally grateful to be his friend and colleague.”

Others share the gratitude of working with Jovino. “I'm blessed to be in his company,” says Ivester. “Jovino is a force, an extremely positive one. I often think of Jovino as a fountain… no… make that a geyser of music.”

The uplifting gush of music has filled Jovino’s discography with more than 35 recordings, beginning with Hermeto in the 1970’s and 80’s, through a stint with Airto Moreira and Flora Purim in the 1990’s, to CDs under his own name in recent years. And more are on the way.

His latest recording, Corrente = Current channels the flow among his Quinteto. Several tracks reveal the telepathy shared among the musicians. One musician finishes the phrase begun by another. On “Two Friends, True Friends,” Deardorf spontaneously dovetails the beginning of his solo to the end of Wainapel’s, using the same melodic shape and rhythm. Jovino employs this mirroring technique after Wainapel’s solo on “Pra Casa” (Homeward).
Sometimes the smooth passing of the baton turns into a juggling game where notes are passed back and forth. On “Sea and Sky,” guest vibraphonist Ben Thomas twists and turns through a frictionless duet with Santo Neto playing harmolodica.

The bulk of this CD captures the band playing together in the studio, but overdubs add interesting flavors. For example, Busch recorded multiple percussion tracks with his huge inventory of instruments. Jovino spent a year picking and choosing the right mix of sounds to season the sonic stew. On “Matraca” (Rattle), Jovino recorded three independent flute solo tracks and found that playing back two of them together created an exciting duet. On “Pra Casa,” the intricate bass line was rerecorded on bass clarinet so the final version switches between the two instruments. On “Two Friends, True Friends,” the wordless vocals and giggles of singers Lena Simon and Caroline Corcoran add playful splashes.

The program of music covers a variety of Brazilian grooves, some familiar, others not. “Vivendo no Presente” (Living in the Present) sounds like a contemporary version of a choro by Ernesto Nazareth from the early 1900’s. “Outras Praias” (Other Beaches) harkens back to bossa nova from the 1960’s. The chord changes of “Pra Casa” evoke the feeling of a familiar jazz standard. Unexpected rhythms appear in the title track “Corrente,” which couples a reggae groove with swinging melody. “Zagaia” (Spear) asserts a repeating figure in seven, but the band solidly grooves in this odd meter. Hand clapping sets up a brisk tempo for “Matraca.” “Sea and Sky” begins in duple meter, switches to triple meter for solos, and returns to duple for the final melody.

Most of the recording was performed from written scores. But musical forms were amended or expanded with free flowing introductions and open ended vamps. Wainapel’s clarinet introduction on the last track explores the fluidly dark chalumeau register. Jovino was so moved by the expressive solo that he renamed the song from the rather generic “Valsa” (Waltz) to “A Fonte” (The Source).

A free bonus track “Bronze” is available from Jovino’s website at http://www.jovisan.net/current.htm. After recording this track, Jovino became fascinated by a “wrong” note which sounded when Ben Thomas’ mallet struck two adjacent metal bars on the vibraphone. He tried to reproduce the unusual sound every way imaginable.

Sixty years ago, Hermeto searched for sonorous pieces of scrap metal behind his father’s blacksmith shop and tried to reproduce the sounds on an accordion. Today, in Jovino’s ear, the same search for music in sound continues.

Jovino will be appearing at Yoshi’s in Oakland on March 2nd and 3rd with the John Santos Sextet. On April 10 he will perform with the UMass Jazz Ensemble in Amherst. From April 11 through 15, Jovino will teach at the Centrum Choro Workshop in Port Townsend.