Nathan Breedlove: Recluse on the Loose 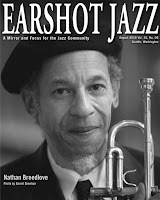 Trumpeter Nathan Breedlove, like all musicians, has collected stories his entire life. His story. Jazz stories. Stories about famous musicians Art Blakey, Lionel Hampton, and Wynton Marsalis. Stories about masterful but modest artists like Mulgrew Miller, James Williams, and Hadley Caliman. Stories about the feast and famine of a life in music.

Through it all, Breedlove's passion played on his slender face. His glow of enthusiasm emanated from a bounty of arched creases on his forehead and the depth of parentheses surrounding his lips. He smiled and relayed his past.

Breedlove was born in Tacoma, Washington on June 17, 1956, while his father was stationed at Fort Lewis. He eventually moved to Memphis, Tennessee, his father's home, in 1968, close in time and place to where Martin Luther King was assassinated. Breedlove's early studies on trumpet and piano earned him an audition with neighbor David Porter, a musician and Vice President of Stax Records. "Lester Snell slipped a 5/4 bar into my sight reading test." said Breedlove. "Afterwards he said, 'Come back in a year.'"

During high school at Hillcrest, Breedlove performed in the Norsemen jazz band. Under the direction of Jim Terry, the band won the 1974 All American Stage Band Festival in Mobile, Alabama. There is a black and white photo on Flikr of Breedlove playing a flugelhorn solo with the band. Always with a sense of style, he donned a light fedora, unbuttoned shirt with rolled up sleeves, wide white belt, slim bell bottoms, and square toed shoes.

A scholarship paved his way to Memphis State where he befriended pianists James Williams, Mulgrew Miller, and Donald Brown. All three would eventually perform in New York City with drummer Art Blakey in the Jazz Messengers. Breedlove dreamed of someday becoming a Jazz Messenger himself.

After a year of college, Breedlove found himself back where he was born for an 18-month stint in an Air Force band stationed at McChord Field. From there he joined Onyx, a funk band in Seattle. When tenor saxophonist Hadley Caliman moved north from California, Breedlove began rehearsing with him every Tuesday at bassist Phil Sparks' house. Over the years, Caliman and Breedlove made three recordings together, but none have ever been commercially released.

Breedlove began taking exploratory trips to New York City. He borrowed $1,000 from Marc Smason and offered two trumpets as collateral. He moved to the Big Apple in 1989 and quickly fell in with jazz royalty by hanging out and sitting in at Bradley's, a beloved but small bar on University Place in Greenwich Village. Many great artists performed on the house piano that once belonged to saxophonist Paul Desmond. From a warm reception at Bradley's, Breedlove scored gigs with Lionel Hampton, Evelyn Blakey (Art's oldest daughter), and a reunion of the 1960s Jamaican ska band, Skatalites. During his nine years with the Skatalites, the band earned two Grammy nominations.

The stars never aligned for Breedlove to work with Art Blakey and the Jazz Messengers. Once, when Breedlove showed up to sit in, the band had just finished their last set. Another time, Blakey scanned Breedlove's sharp outfit head to toe and said, "You're gonna' want too much money!" Much later, Breedlove lived with Evelyn Blakey. When Art was very ill with terminal lung cancer and visited his daughter's apartment, Breedlove soothed his pain by playing piano.

Breedlove returned to the Seattle area in 2005 to care for his own ailing mother-in-law and temporarily retreated from active public music making. Lucky for us, he has broken his hermit-like silence with an interview in bassist William Parker's 2015 book Conversations II, an appearance with Jameel Moondoc and Mathew Shipp at Vision Festival in New York City, and a new recording on Space Note Records of his Nu Trio.

Joined by bassist Phil Sparks, and drummer Brian Kirk, Breedlove's March 2016 release Captain of the Light Brigade charges forth with "Calvary," a minor blues by saxophonist Billy Harper. The playlist also includes Vernon Duke's 1934 ballad "Autumn in New York" as a nod to his time on the East Coast. Breedlove pays tribute to past trumpet masters with Kenny Dorham's ballad "La Mesha," Fats Navarro's bebop melody "Fat's Flats" on the chord changes of "What is This Thing Called Love," and Lee Morgan's shuffle "Triple Track." Breedlove's original "The Hermit of Nu" ends the program by adding guitarist Lonnie Mardis.

Breedlove has refined a distinctive trumpet sound all his own. With the punch of Morgan, the warmth of Navarro, and thoughtfulness of Dorham, his tone exudes kindness. Full, fertile, and funky, his long notes shimmer with vibrato and short notes articulate with percussive intensity. His phrasing comes like a fast ball straight out of the bebop tradition. Catch him September 4th at the Royal Room (5000 Rainier Ave S) and September 6th at Spite House (1513 14th Ave).